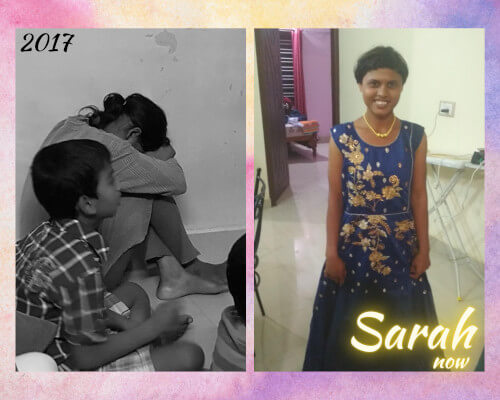 Some stories tug on your heart strings. Other stories grip your heart and don't let go. Such is the story of Sarah. On January 2, 2017, an old man came to the door of Berachah Bhavan. He gripped next to him a young teenage girl who wore torn clothing with a strong stench of urine. He told Jeevan and Jisha that he had found her wandering the street and that she was "mentally retarded". He claimed that she was orphaned after her parents died in the construction field.

Jeevan and Jisha could see that she had some special needs that they did not feel equipped to handle and were prepared to turn her away. The man who brought her threatened to take her to the bus station where she would likely incur much harm. Jeevan and Jisha felt compassion and took her in. She was introduced as Sabbamma, which means "cursed one".

Sabbamma's eyes were filled with fear. The thread of her skirt was tied so tightly that it was wounding her flesh around her waist. She was violently resisting the staff's efforts to clean her up, but eventually they managed. They asked her questions and she kept her head down and answered "I don't know" to anything they asked. For days, she sat in the corner, curled into a ball. She didn't interact with any of the adults or children. She hurt herself often, making herself bleed. The staff kept a close eye on her and occupied her with drawing books.

That first month, Sabbamma came to be known as Sarah. The meaning of the name Sarah is "princess" and was more life-affirming than her given name of "cursed one". Sarah slowly began interacting with staff and answering a few questions.

After several evaluations, the doctors diagnosed Sarah with autism and also treated her for self-harm. The doctors advised Jeevan and Jisha to find her family for medical history. They began at the logical place: with the man who dropped her off. The man, full of anxiety, then revealed that Sarah was his own daughter and the sixth child in the family. Her mother had died when she was young and the man had remarried. Nobody was willing to care for her, other than occasionally feeding her. The man apologized for introducing her as an orphan but justified his actions because he didn't think they would take her otherwise.

Sarah was rescued from the neglect she had previously faced. At Berachah Bhavan, she is now fed three meals per day and has been taught to do all of her daily activities. She is no longer cursed, but "blessed and happy" 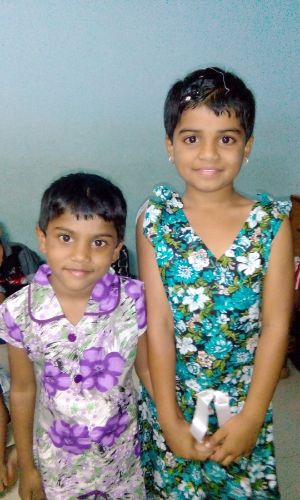 India is home to 1.3 billion people and their population is continuing to increase. With that many people, there are a lot of stories to be told. The children who come to Berachah Bhavan children's home have been orphaned by either one or both parents. They are there for a variety of reasons. Some have been found abandoned in train and bus stations. Some lived in utter poverty with alcoholic parents. Some have had both parents die and others were left because after their father died, their mother had no way to care for them.

One such story that touched our heart was that of a little girl named Spandana. Spandana was born into a family with both a mother and a father. However, she was the fourth daughter. Her mother had two daughters and when she delivered her third daughter, her husband refused to give the child care and the neglect caused her to die. When she gave birth to another daughter, she knew that this baby would be neglected too so she begged someone to take her home. On the fifth day, an older man agreed to care for her, which he did for a few years. This man had grown children and unfortunately, because of Spandana, he was unable to marry them off, because people believed that this girl was an illegitimate child of one of his grown children. This is when he gave Spandana to Jeevan and Jisha to care for. Spandana is a joyful, happy child, getting an education now. 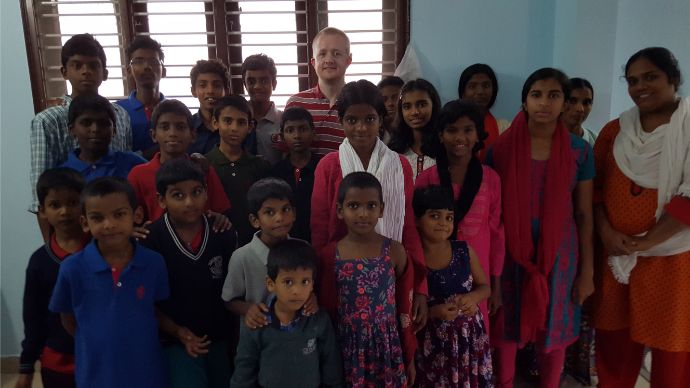 Small World Charities became a 501(c)(3) organization in 2019, though our story and our mission began several years prior.

In 2015, Kenneth Crowder, president of SWC, went on a business trip to Bangalore, India. Prior to the trip, he asked a coworker for an orphanage or children's home that he could visit. The desire to care for orphans in their affliction was a passion of his family so it was added to his itinerary.

Upon arrival at Berachah Bhavan Children's Home, Kenneth was greeted with smiling faces and singing. A husband and wife (Jeevan and Jisha) were caring for approximately 20 children at that time with the help of one cook. Kenneth brought some board games along and taught the children how to play. At the end of his day with the kids, he was compelled to leave the rest of his rupees (Indian currency) behind to help the family care for all the children. Thus began the support of Berachah Bhavan.

In 2017, Kenneth returned to India with his wife, Michelle, and their four children. They spent three weeks getting to know more of the Indian history and culture, which included four days at Berachah Bhavan. The children ran around together playing football, badminton, and board games. The children had also been hoping to go to a local amusement park, so they took them there for an amazing day. At this point, Jeevan and Jisha were now caring for 25 children who kept being brought to them due to their abandonment, parents' deaths, or a mother's inability to care for them.

Kenneth and Michelle were happy to have an ongoing relationship with the children's home and continued to financially support them. Michelle's parents also began supporting the children's home after hearing some of the children's stories. However, the home's financial needs were more than could be provided without additional fundraising. Berachah Bhavan's number of children grew to 40 during 2018 and they were still turning dozens more away. What could be done?

We could not do it alone, so Small World Charities was soon created. Our goal is to help the children's home get all the funds they need to provide food, shelter, education, and medical care for the children who are brought to them. As that number grows, so will the funds we send. As we gain more contributors, additional children's homes will be sought out and supported. SWC is committed to transforming lives through meeting basic needs and bringing hope where there is none.

Where it all Began 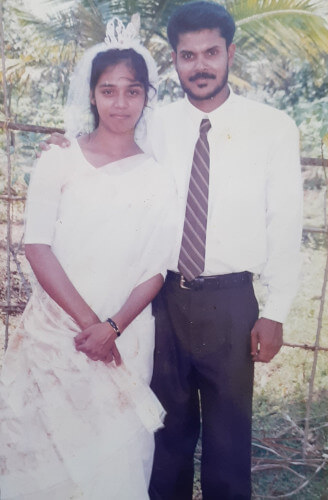 The story of Berachah Bhavan Children's Home is one that needs to be told. It is a story of a newlywed couple who witnessed great need and as years passed, ended up in a place they never would have imagined: running a children's home with 49 children with more knocking on the door every month.

The story begins in the year 2000, when newlyweds and Indian-natives Jeevan and Jisha began visiting a nearby slum. They came to encourage the children who they regularly saw drinking unclean water from the roadside and scavenging for food. Many of the children belonged to single mothers, many of whom were alcoholics. The mothers would be gone all day doing construction work or working in a more wealthy family's home. Jeevan and Jisha felt pity for these starving children and would bring them juice and cookies while they taught them songs and stories.

In May 2006, stirred by the extreme poverty they witnessed every day, they decided to take two children into their home to raise with their two biological children. They determined to provide these two abandoned children with education, food, shelter, and all necessities. That same month, three more children were added to their home. They were now parenting 7 children.

This family lived in a small rented building for eight long years, continuing to add children to their home every year. They had difficulty paying their rent and school fees for their children. At one point, the children had to stand outside the classroom to learn because their fees had not been paid. In 2013, they were asked to vacate the rented building. With 22 children, nobody was willing to rent a home to them.

Thanks to a generous price for land and a family member taking out a loan for them, they were able to begin construction on their current home. They completed the ground floor in February 2014 and they all stayed in just a couple small rooms. The upper two levels of the home were completed in 2015 and they were able to more properly accomodate all of their children.

We first got involved with the children's home in that very year. The children's home continued growing and in 2017, many more children were added to their home. Now in 2019, their home has grown to 49 children and continues to grow every day. Jeevan and Jisha are thankful for the provisions they receive so that their children can continue to receive education, food, shelter, and medical care. With help from Small World Charities supporters, we are hopeful that they will continue to wipe the tears of starving children in the days ahead.